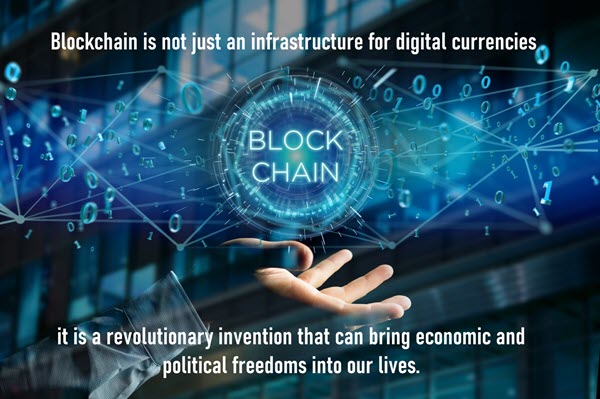 We started hearing about blockchain with bitcoin. What is blockchain actually? Blockchain is like a global open ledger. It is used not only in the production of cryptocurrencies, but also in many different areas such as storage, management and storage.

We can say that blockchain technology will be at the heart of the fourth industrial revolution. Blockchain not only creates a safe and transparent economic environment, it is a technological platform that is a candidate to enter our lives at every stage of social and administrative life.

For example, trade chains, land registers, legal practices and even digital governments seem to be shaped by blockchain infrastructure.

What will be the most fundamental change that blockchain brings to our lives?

It seems that 2020 will be talked about even decades from now. 2020 has been a year in which our way of life and our global social, economic and political changes rapidly entered.

The penetration of blockchain into our lives will be primarily by changing the economic system. This is a process that begins with the digitalization of money. As I wrote in my previous articles, the economic system has been a system based on money for the last three hundred years. The most important feature of this system is that it has a highly centralized structure.

We are in the fourth industrial revolution. This is what many call industry 4.0. Production systems have changed three times in three centuries since the first industrial revolution. The first of these is the transition to large-scale centralized production with the discovery of steam and its use in industry. The second stage is the discovery of electricity. The third stage is the use of the internet and robots in production, and finally the fourth stage is the stage where artificial intelligence, which we call virtual industry (see, “virtual industry”), starts to come into play. At this stage, we see that 5g and higher internet technologies are activated at the technological level called the internet of things (See, “digitalized knowledge economy”). As you can see, the process contains changes. It has been so, it will continue to be so.

With Industry 4.0, the human factor began to withdraw from production processes, and artificial intelligence and robots began to take its place.

In this process, the evolution of money developed in parallel with the evolution of production systems. For example, in the first industrial revolution, the monetary system had a gold standard (See, “Gold and Silver”). With the use of electricity in production, the monetary system also evolved into a partial gold standard. As the process progressed and both production and trade began to increase in intensity and speed, money also turned into an unlimitedly printed form. This form is called the fiat money system (See, “Partial reserve monetary system” and “Limited Unlimited Money”).

In the fiat money system we live in, someone decides the amount of money. The process of creating money is actually borrowing. This debt is made by governments on behalf of the citizens. At this point, the introduction of blockchain technology meant that for the first time, the money printing and management process became transparent and decentralized from a single source. This revolution starts shaping the future from this very point.

The biggest problem created by the system here is that a small minority makes decisions about the masses. The thing that is printed freely, that is, that is printed by borrowing and called money, is actually nothing. Moreover, they make people pay interest on this nothing with taxes and inflation. In fact, the generated values ​​flow into someone’s pocket through these two channels. This is called wealth transfer.

The entrence of bitcoin after the 2008 crisis is to bring an alternative to it. Equipped with a blockchain technology base that will end the hegemony of central banks in the current system, this new form of money, with its decentralized and limited structure, became the gong sound announcing the end of the system.

In a way yes. While blockchain brings a great alternative to the monetary system where freedoms are controlled by centralized structures, it is actually a first step towards the transition to individual decision-making processes.

It promises a new life sub-base that can prevent someone from making decisions on our behalf.

Can blockchain technology change the way it is governed?

See also  Is the Great Crash beginning? There are two backs of the knife situation for the FED

There is time for this to happen. But that will happen eventually. Unfortunately, many of the world’s governments are not yet aware of this technological advance that threatens their existence. However, transformation is inevitable and they have to prepare for it.

Finally, governments that recognize the change will want to control it. To what extent they can achieve this, we do not yet know. As the system succeeds in collapsing, it will be inevitable that alternative systems will begin to emerge.