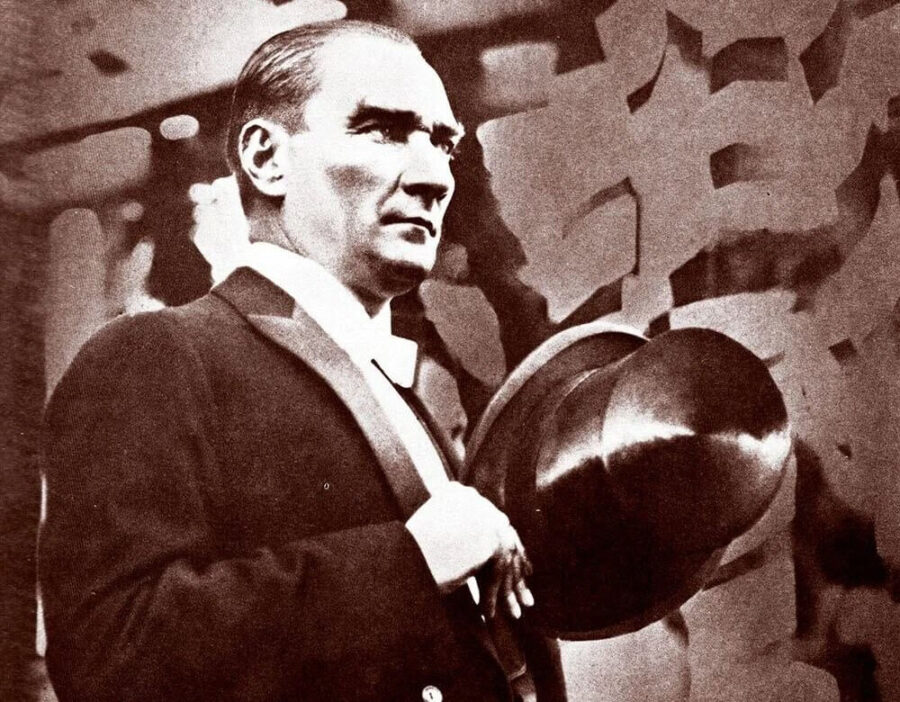 We are gathered here today on the occasion of the 84th anniversary of the physical departure of our Great Leader, Ghazi Mustafa Kemal Atatürk.

When I was asked to give a speech about Atatürk, I thought it was not easy for me to put Atatürk into words. What word, what sentence could adequately describe him and my love for him? Also, I don’t like to talk about his death. I know that he lives with us.

However, as an academic who walks in the light of science and science, which is the spiritual legacy left by Atatürk,

As a man of duty, who takes responsibility and tries to do it seriously, just like Atatürk, while doing my job,

As a mother who tries to raise her daughters as sons of the motherland who will take care of Atatürk and the modern Turkish Republic, which is the greatest legacy he left us.

and as a fearless Turkish woman who walks on the path drawn by Him, with her chest up high, honorable and hardworking;

with my gratitude to Him in every breath I take, by protecting His principles and His revolutions,

As a modern Turkish woman, just as he asked of me, I am so devoted to my country that I would sacrifice my life when necessary, and I may not be able to explain it in a literary language as it should be,

I witness the noble blood flowing in my veins, by experiencing Him personally and by trying to be an example to my daughters, then to my students and society as a modern Turkish woman as He wishes,

I already think that I can express Gazi Mustafa Kemal Atatürk with my life and behavior.

Is it to commemorate Atatürk, to tell the memories of history that reminds him of him, and to repeat his words and actions over and over again? We have never forgotten him… In the last part of the Speech, which was written by Gazi Mustafa Kemal Atatürk himself and sang in the 10th Anniversary of the Republic, “I have no doubt that the unforgettable, great, civilized quality and great civilized ability of Turkishness are due to this. With its next development, it will rise like a new sun on the high civilizational horizon of your horse.” In the last part of the original text he said, “The day I say this is the truth, this is what I wish from you and from all civilized humanity: Remember me.” he wrote, for some reason later crossed out this sentence and finished his Discourse without giving place to this wish.

Even though Gazi Mustafa Kemal graciously crossed out this wish, we, the Turkish nation, Turkish children and Turkish youth, are ready to defend the Republic of Turkey, whose character is independence and which is its greatest legacy to us, and our sacred homeland, whose every square centimeter is watered with the blood of martyrs, to the last drop of noble blood in their veins. We have never forgotten and will never forget.

In addition to his statesmanship, command and leadership, Atatürk was actually one of us with his anger, joy and joy. He always said that himself. For example, while reviewing the placards prepared for the celebration of the twelfth anniversary of the Republic, he crossed out sentences such as “Atatürk is our greatest”, “Atatürk is the greatest of this nation” and wrote “Atatürk is one of us” instead of removing it from the list. Yes, he was one of us.

Years ago, in my first year of university education, I established the “Ataturkist Thought Club” with a group of friends as the first thing to do. We were also publishing a magazine of this club called “Enlightenment 21”. I was one of the editors of the magazine. I wrote an article about “Atatürk” in the first issue of that magazine. With your permission, I would like to voice my short article before you.

“History cannot be anyone’s property. It is a common phenomenon kneaded with the contribution of all humanity. In order to be able to take a place in history and prove ourselves, we must first weave and enrich the ideas we defend on our own loom. It is not everyone’s duty to take part in the historical period, which is the common work of all humanity, and to do things that will make us talk about ourselves for years.

The respected place of the great Atatürk, the founder of our republic, the creator and guide of our revolution, is primarily in the heart of the Turkish Nation. It is still studied, researched and understood by the nations of the world with the ideas it has created and the line it has created for the development of humanity. This line; including the principles adopted and protected by the human world; It was kneaded with his revolutions and came to the light of day, and it was in harmony with his principles and beliefs.

Atatürk, who wanted to live as an independent and civilized nation within our national borders with his nation, not only corrected the bad luck of the Turkish Nation, but also became a light of hope for the exploited and captive nations of the world, with the “National Struggle Movement” he continued. According to that; “As much as he thinks about the existence and happiness of the nation he belongs to, he should think about the peace and welfare of all the nations of the world and should try to serve the happiness of all the nations of the world as much as he values ​​the happiness of his own nation.” Atatürk, with his genius, has a respected place among the commanders who grew up in the last century, as well as a talented statesman in the political field.

On the way to reach the level of modern civilization by saving the Turkish Nation, which has been neglected for the century, from backwardness; He is the greatest leader who won the love of his nation with the revolutions he carried out. His revolutions have been the bloodiest revolutions history has ever seen. These also indicate Atatürk’s versatile personality and talent.

An important step on the way to rise above the level of contemporary civilization was the separation of religion and state affairs. By establishing a “secular” state, Atatürk also created an environment of free thought, which is the only condition of modernization.

Atatürk is the greatest politician who stated that in order to create a strong, happy and stable Turkey, it is necessary to follow a national foreign policy and that mutual friendships are necessary. With this in mind, the principle of “Peace at Home, Peace in the World” also belongs to him. How much the world needs to understand this right now, right?

We can say that Atatürk’s greatest mastery was perhaps his organizational genius. He came to Istanbul in November 1918, and within 6 months until May 1919, he made contact with all segments of society. He had established a network of organizations from the palace to the public, from home to abroad. They even had men in foreign embassies. Some of the organizations that it has direct or indirect relations with are Karakol organization, Müdafa-i Milliye, Maukavemet-i Bahriye, İmalat-ı harbiye. According to Atilla İlhan, the War of Independence was neither a crazy move nor a miracle, it was the natural result of a very skillfully designed organized action.

First of all, knowing the era in which he grew up, learning the environment in which he grew up will be a document of every stage of his life, a proof of his greatness. Atatürk is a great person who has an unforgettable place not only in Turkish history but also in world history.

I bow respectfully in front of the memory of Gazi Mustafa Kemal Atatürk and thank you all.