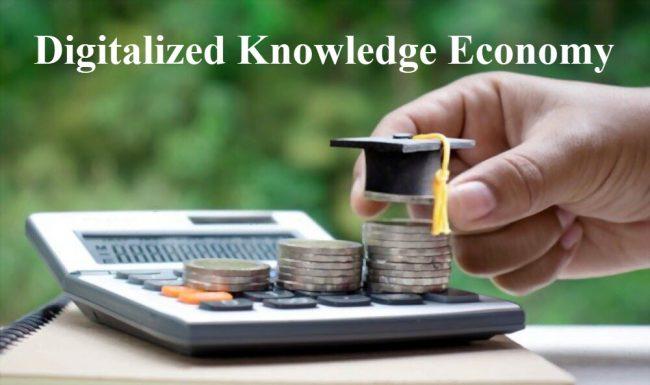 The first of the most important features of the knowledge economy is that it combines large-scale production with the epic standardization of products and services. Another feature is that it seems to loosen or even reverse the law of diminishing yields, which is one of the cornerstones of the economic system we are in. Thus, in the knowledge economy, there is a potential for continuous innovation. Continuous innovation has the potential to loosen or reverse this most universal constraint in the economic system. Another feature of the knowledge economy is that it brings together the activity of producing and the activity of imagination or discovery.

The best firms become like the best schools and have the potential to radically change the relationship between person and machine. In the current system, economy is the system of allocating scarce resources. In the money-based free market system, production is now largely driven by people’s brains. Whether you are producing something or providing a service, the quality of what is achieved now more than ever depends on the quality of the mental input entering the production stages. Many factories, which are part of the knowledge economy, make us realize that production cannot be sustained with the old methods, it must become smarter and leaner.

On the other hand, the increasing dependence of production systems on information and technology has started the process of moving the economic system to digital platforms. Digital platforms are, of course, meaningless markets without electricity and internet. Nowadays, we see that many things, from social relations that cover most of our lives to production and sales relations, are now happening on virtual platforms. Part of the economic activity has now begun to move to virtual environments. These are thousands of such as advertisements, customer-oriented production, clothing, grocery, health and cosmetics, technological devices, travel and of course vacation opportunities offered in virtual reality. We will no longer see the developed country, developing country concepts that we are used to in the digital world. Thus, according to the report of the United Nations in 2019, approximately 90% of the digital economy in the world is formed by companies from the USA and China. The remaining 3.6 percent is the share of Europe and 1.3 percent is the share of Africa.

See also  Is The Money Economy Ending ?
Share on: