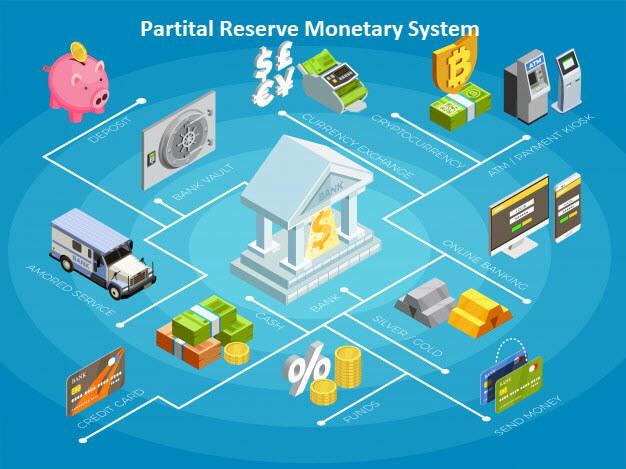 Money is created in two basic ways today. The first is cash (fiat / fiat currency) in paper and metal form issued by Central Banks, and the other is loans (debt) created by commercial banks depending on the partial reserve system. Here, we’ll talk about partial reserve banking. It would be descriptive and useful to talk about full reserve banking before partial reserve banking.In the previous system there was a “limited money system”. The Central Bank was able to issue  money in exchange for gold owned by the state. This system was applied in the USA between 1871-1914. The system is called the “classical gold standard” based on limited money or 100 percent gold.

In this case, there is a certain interest payment as the cash (fiat money) is issued against bills and bonds. In fact, this money  is the debt of the state. The state pays the state debt from the income originating from the taxes. Therefore, this debt is the debt of taxpayers, that is to say , this debt belongs to  citizens. With this money, the state can pay for various infrastructure expenses, investments, etc.

State’s expenditures become income to private / public institutions in the market. These institutions deposit their income in banks, banks accept these funds and put up these funds as collateral and extends them by lending (McLeay, M., et al. (2014). “Money Creation in the Modern Economy.” Quarterly Bulletin 2014 Q1.).

In the partial reserve system, we can explain how the deposits that come to the bank ,create loans as follows: A certain percentage of the deposits coming to the bank, like 10 percent, are kept in cash in the bank’s safe and the rest, that is, ninety percent, is given as loans.

An obligatory proportion of the reserve money held in the bank is kept in the bank’s account at the Central Bank. If the bank wishes, can keep more than this rate (reserve requirement ratio) set by the Central Bank in its own safe.  For example, if the bank received a deposit of 100 TL, the bank keeps ten percent of it in cash in the Central Bank account as a required reserve (reserve).  The remaining 90TL is given as credit. 90 TL taken as a loan enters another bank as a deposit, that bank keeps ten percent of 90 TL, that is 9 TL, as required  reserve and gives the rest 81 TL as loan, these loans continue until they are reset, and as a result, 1000 TL is created, 100 TL of which is required  reserve and 900 TL is credit.

These credits, which are created digitally on the screens of the commercial bank’s computers and are only 100 TL in return, are actually debt.  Besides, if we remember that even 100 TL is fiat (fiat) money, which is issued unlimitedly without being based on any commodity, as mentioned before, we understand that the system creates an illusion of money.  Therefore, we can say that the  our financial system  is a system in which the cash (fiat) money issued by the Central Banks is converted into loans in multiple manner in digital environment by commercial banks.   If customers request their credits or deposits in cash by going to the bank, it is inevitable for the banks to go bankrupt because such money is not exist in reality (Çetin, E. (2019). Nomisma, Bağımsız ve Milli Para Sistemi, ALFA.).

As understood here, contrary to popular belief, most of the money  (such as 90 percent, 95 percent, 99 percent, in short, as loans created at varying rates based on the required reserve ratios deposited in the Central Banks of the country)   is not produced by  the state and its affiliated institutions, but rather private organizations aiming profit.

Moreover, the amount of dollars printed as metal coins or issued as banknotes all over the world is approximately 66 trillion Dollars, in our world where the required reserve ratio is  average 5%. With the partial reserve banking system, depending on this amount, digitally generated fiat money is approximately 20 times more than this. With its current form, the system has been turned into a natural environment for crises to burst , as mentioned at the beginning.  In the old system, when a bank or company goes bankrupt, the state can not issue  extra (unbacked ) money to save these companies, as the state issues money  based on gold. In this case, banks and companies have to be more careful about taking risky steps.

See also  Is Bitcoin in a Bullish Season ?

Also, they have to save for  rainy days.  In the new system, banks, companies and individuals do not feel the need to save, because in a crisis, they are saved by the unlimited money that is printed by the state without any basis.