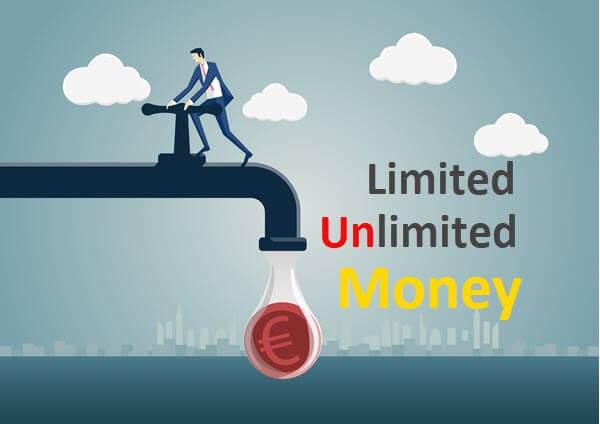 Money can essentially be studied in two forms, these are the limited (solid) form and the unlimited form. Limited money is the metals with intrinsic value such as gold, silver, platinum, which cannot be produced in the desired amount by the states, whose amount is limited in the world. Recently, digital currencies have been tried to be added to these. The limited feature adds solidity to the money.

Unlimited money, on the other hand, can be used for any precious metal, commodity, etc. It is money in paper and coin form that is not bound and can be printed as many times as desired. The first of the examples of unlimited printing of money, as the world’s first paper money by the Chinese A.D. The coin, called jiaozi, was minted in the 11th century.

This money was originally based on limited assets such as spices and silver. Later, in the 1260s, Kublai Khan, the Mongolian Yuhan Dynasty, abolished the reliance of this money on limited assets. Thus, he started the transition to unlimited money called “fiat money”. Naturally, hyperinflation started and limited money was returned (Barnett, V. (2015). Routledge Handbook of the History of Global Economic Thought. London: Routledge).

Another example of unlimited money is the crisis and high inflation created by the banknotes, which were first produced on the basis of gold and silver and then printed without return, by the Stockhours Banco bank, founded by John Palmstruch between 1657 and 1668 in Sweden.

John Palmstruch was imprisoned at the end of this unlimited money experiment and ended his life there (Wile, R. (2013). Here’s Why The World’s First Central Banker Got The Death Penalty. Business Insider). In the following years, in France, John Law was authorized to open the Bank Generale. When the banknotes, which were printed on the basis of gold and silver at the beginning, were printed without compensation and unlimited in time, inflation increased rapidly.

Another coin experiment, which was printed indefinitely, took place between 1919 and 1923 in Germany after the First World War in the Weimar Republic. This experiment, which caused hyperinflation, probably fatally undermined the Republic (Holtfrerich, C.-L. (1986). The German Inflation, 1914-1923: Causes and Effects in International Perspective, Berlin.; Feldman, G. D. (1993). The Great Disorder: Politics, Economics, and Society in the German Inflation, 1914-1924, Newyork). Finally, we are experiencing the first ever unlimited currency experiment globally, with the United States completely abolishing the convertibility of the dollar to gold in 1971.