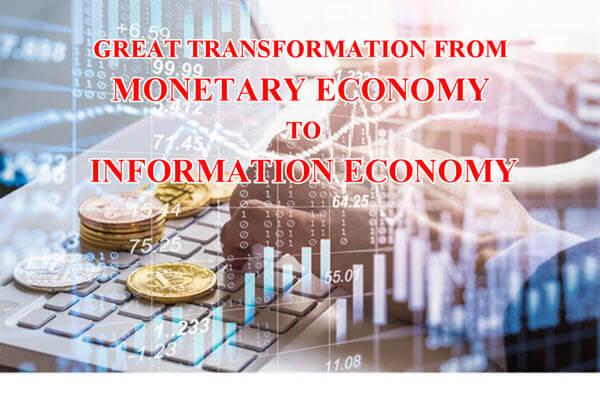 The economic system we have been in for nearly 300 years since the Industrial Revolution is a monetary system. Firstly, European countries, USA; The money economy, which developed with the industrial revolution in developed countries such as Japan, turned towards digitalization with the production of microchips in the 1950s.

Today, the common view of both economists and those working in related disciplines is that digital technologies will be an important element of production systems in the not too distant future. Therefore, in this part of the study, opinions will be expressed on the assumption that the money-based system that we call “money economy” will become more and more capital and technology intensive.

The basis of the money economy is capital. The main element in this economic model is industrialization, that is, large-scale centralized production in factories. This centralization often brought monopoly. As capital grows over time (capital accumulation), mass and large-scale production, large-scale consumption, mass transportation, mass communication, mass armament, etc. has also created such elements.

That is to say, the tailoring profession, which used to be made with personalized patterns in small and scattered places, has now been replaced by production with standard patterns in large and central textile factories. This brought about standardization. This centralization and standardization seen in the textile example has been the visible evidence of how money economy shapes life in education, health, transportation and all aspects of life.

Large-scale production has also increased the demand for human capital and labor. As the demand for more workers could not be met in urban populations, migration from rural to urban areas began, and small 2-4-person nuclear families began to take the place of large patriarchal agricultural families.

On the other hand, the energy need, which is an indispensable element in large-scale and centralized production, is met from fossil fuels. The fact that fossil fuels are concentrated in certain parts of the world has also created the problem that not every country in the world can reach these resources under equal conditions and costs. The extraction, refinement, storage and distribution of fossil fuels also took a place in the system itself and gave birth to its own economy.

Naturally, countries that have or are close to fossil fuels have become more advantageous in raising their capital. We can say that energy and money are the two most basic elements of the system we are in, since the economy, which is largely based on the energy obtained from fossil fuels, is based on money, that is, capital.

One of the ossified features of the money economy is the bureaucratic network of relations. Bureaucracy, as a factor that accelerates decision-making and implementation and increases costs, is also an indicator of the clumsiness of the money economy, with its structure that deepens and complicates the network of relations between the level of ownership of the main capital and the lowest levels. For example, in state economic enterprises (SEE), the main capitalist is the state itself. Decision-making and implementation processes take time in these institutions, where bureaucracy is the heaviest. In this system, where the lawmaker and enforcer are the state, it is inevitable that a certain period of time will pass for the work to be done, whether in the state or in the private sector where a similar structure is dominant.

The new form of the system, which is expected to transform, will be adopted not only in developed countries but also in all parts of the world, albeit not simultaneously. We mentioned that we are in the last period of the money economy and the transition to the information economy started with the production of the first microchips in the 1950s.

Knowledge, which is not limited to production systems, has been a driving force for development in all life. When information is digitized and with the help of the internet, it has begun to transform into economic activities more easily. In this way, it has gained an undeniable place in economic growth and development.

The point reached in the information and technological infrastructure facilitates the rapid globalization of economic activities. Therefore, the knowledge economy is seen as the last stage in the structuring of the global economic system. It should be noted here that in historical processes where production systems change, one system does not completely eliminate the other, it only transforms the old system by blending it into the new.

It is expected that the structure of the production inputs will change to a large extent with the developments in the field of nano technology. In addition, at the level reached in the field of artificial intelligence, machines seem to be candidates to disable the human factor in production and in many parts of the economy, with their equipment that can collect, use and analyze information about almost everything in the digital environment, and even make decisions at the last stage.

In addition, in Figure 2, the percentage values ​​of robot use in the service sector in 2019 are given. The rapidly expanding use of robots, especially in industries that are traditionally labor-dependent and sensitive to minimum wages, is fast becoming a necessary de facto proposition for robotics companies. These industries include cleaning services, safety and security services, delivery services, logistics and warehouse operations, and manufacturing operations.

It is clear that the workforce that is expected to be in demand the most in the information economy, besides robots, will be for people who are expert workforce, computer and internet literate, equipped with the ability to process data, develop algorithms and simulation models, and innovate on production processes and systems.

Therefore, knowledge is the catalyst and connective tissue in modern economies (Ruggles, R. and D. Holtshouse (1999). The Knowledge Advantage. Dover, NH, Capstone Business Books). The world is in the first transitional stage of an economy based solely on knowledge (data). For example, global internet protocol (IP) traffic as a proxy for data streams has grown from about 100 gigabytes per second in 1992 to over 45,000 gigabytes per second in 2017. It is expected to reach 150,700 gigabytes per second by 2022. The growth of digital platforms is directly linked to their capacity to collect and analyze digital data, but their interests and behaviors largely depend on how they monetize that data to generate revenue (UNCTAD (2019). Value Creation and Capture: Implications for Developing Countries. UNCTAD Digital Economy Report 2019, United Nations Conference on Trade and Development).

Figure 2. Use of Robots in Various Services (%)