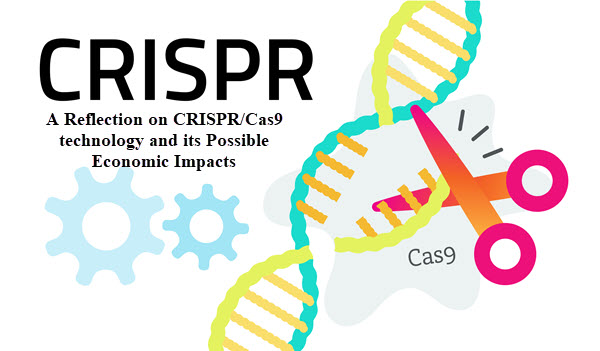 Emmanuelle Charpentier and Jennifer A. Doudna, winners of the Nobel Prize in Chemistry for recent research, discovered the CRISPR-CAS9 genetic scissors (2020). Using them, the researchers were able to modify the DNA of animals, plants and microorganisms with extreme precision than before.

CRISPR,  “clustered regularly interspaced palindromic repeats” technology is basically based on a natural system created by bacteria to protect themselves from the effects caused by viruses. How does it work? So, within the bacteria, if it detects a virus DNA, it produces two types of short RNA, one of which contains a conjugate sequence to the virus’s DNA.

These two RNAs form a complex with a protein called casnayn. Cas9 is a nuclease type enzyme that can cut DNA. When the conjugate sequence, known as guide RNA, finds its target in the viral genome, Cas9 cuts the target DNA and inactivates the virus.

At this point, scientists realized that they could be engineered to cut any DNA sequence at a precisely defined location by modifying not only viral DNA but also guide RNA to match the target.

Once inside the core, the resulting complex will be locked into a precisely known short sequence. Cas9 will open the DNA and process it with the target RNA. Once the pairing is complete, the Cas9 ​​uses two small molecular scissors to cut the DNA.

When this happens, the cell tries to repair the cut, but the repair process is error-prone, leading to mutations that disable the gene. These mutations are random. Sometimes researchers want to more precisely replace a mutant gene with a healthy copy. This can be done by adding another piece of DNA carrying the desired sequence.

Once cut with the CRISPR system, this DNA template can match the cut ends. It can merge or replace the original series with new versions. This can be done in cultured cells, including stem cells, which can give rise to many different cell types.

It can also be done in a fertilized egg. Allows the creation of transgenic animals with the targeted mutation. Unlike previous technologies, CRISPR can be used to target many genes simultaneously. This seems to be an advantage for studying complex human diseases caused not by a single mutation but by many genes acting together.

These methods are being developed in many areas. It is a revolution that can be used in agriculture, drug development and genetic diseases.

It can be said that this technology has a revolutionary effect on the life sciences. So how will the economy be affected in a new world order where DNA can be changed with this technology?

Thanks to this technology, cancer treatment can be developed and this disease can be neutralized, while hereditary diseases can be prevented. With the development of CRISPR/Cas9, the world began to evolve in a different direction.

This technology can provide cures for diseases, and the healthcare industry is primarily affected. As it is known, the health sector covers an important part of the world economy. In addition, it can make the agricultural sector more productive. Perhaps as a precaution to the approaching drought, drought-resistant agricultural products can be developed.

In fact, even more importantly, human beings can be produced by modifications to human DNA. It is certain that the ethical side of this will gain importance as well as its economic and social effects. Consider that more productive people are produced for certain economic sectors who can meet the needs of those sectors. What could be the consequences of employing people who eat less, sleep less and don’t get sick in production?

Finally, the idea of ​​reducing the human population has been known for a long time. So, while it is possible to extend human life with CRISPR/Cas9 technology, how would the people who have this idea react to it? Or can this technology be used for exactly this purpose? Unfortunately, every technological development cannot always be used with good intentions. The splitting of the atom certainly did not come to Einstein’s mind as an atomic bomb.